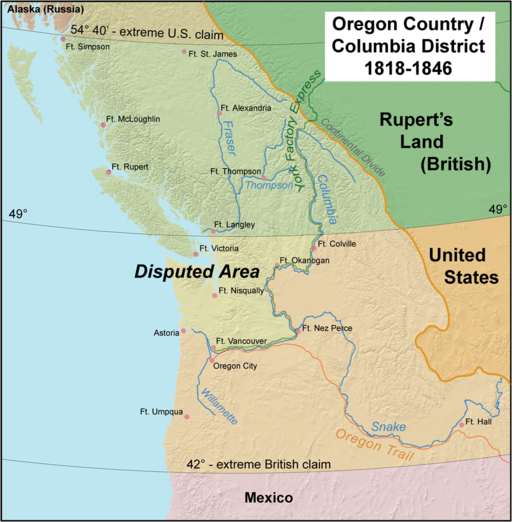 In 1845, Britain and the United States were both considering going to war over which one of them had the right to claim the Oregon Territory. (Neither side seems to have bothered to consult the people actually living there at the time.)

The British wanted to claim the territory all the way down to the border with Mexican-held California. The Americans, on the other hand, wanted to claim the territory all the way up to the Russian-held Alaska. In map terms, they claimed the border was 40 minutes past the 54th parallel. Their motto was 54-40 or Fight. From their point of view, America needed this land, to provide room for the people coming west to settle. It was their right to claim it. This whole argument was what led to term ‘Manifest Destiny’ being coined.

The British didn’t have a catchy motto. They were mainly interested in the resources, such as lumber and furs. Thanks to the fashion in beaver hats dying out, that meant they really only wanted to hold onto the land for the trees. And they still had a whole lot of trees in Canada. Even so, they didn’t like the idea of giving up land, especially to the ex-colonials with whom they’d already gone to war twice in the last 70 years. The British government decided to send out a pair of army lieutenants on a confidential mission to investigate, see how much work it would take to make the territory defensible against the Americans.

That’s what led to me writing The English Lieutenant’s Lady. I was fascinated by the idea of the British sending spies into Oregon, the more so as neither of these men were in any way professional spies. One was a general’s aide-de-camp, with a talent for watercolors. The other was an engineer. The two of them posed as tourists while they drew up plans to occupy Oregon City, build forts on the Columbia river, and keep the Americans out. What if one of them also fell in love while he was in Oregon? There is documentation to support this possibility.

I read through a lot of historical documents while researching the Oregon Border Dispute. Though even as a complete history nerd, I still think it’s a bit extreme to have a coat made up of headlines dealing with this issue.