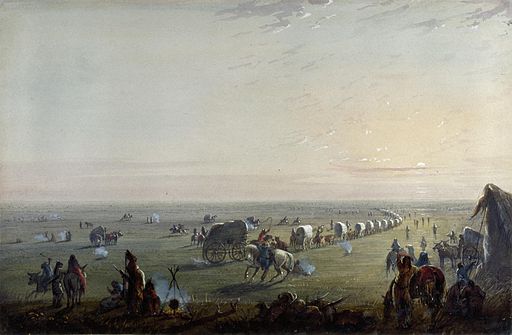 History can be boring when it deals with economic issues and large, sweeping movements that usually deal with -isms. But history can be fascinating if you look at individual people, the problems they faced and the choices they made.

The Donation Land Claim Act of 1850 stated that a white man could own 320 acres of land in Oregon basically just by asking for it. If he were married, he could claim 640 acres, a square mile. The other 320 acres were considered to be his wife’s claim. The wife could not have claimed the land on her own, however, any more than a single woman could. The only way the wife got control of the land was if her husband died. Good fodder for a mystery novel, perhaps, but not a romance.

Where I saw possibilities for a romance novel was in the part of the act that stated that any single man could claim the additional 320 acres, so long as he got married before December of 1851.

Apparently, there were a lot of marriages that year.

I’ve read secondary sources who claim some men married girls who were too young to be wives; these girls stayed with their parents until they were old enough to live with their husbands.

I set my story in the fall of 1851 because I wanted Liza to face pressure to get married. As a young, unmarried woman in the Oregon Territory, she encountered a lot of single men who wanted to marry her. I liked the conflict it set up for Matthew: he did not want to marry a woman he couldn’t remember proposing to, but at the same time it bothered him to think of her marrying someone else. The poor man wasn’t being very logical. But if I’d had every memory of my past stripped from me, I might not be very logical either.