“I can’t imagine a man really enjoying a book and reading it only once.” — C.S. Lewis 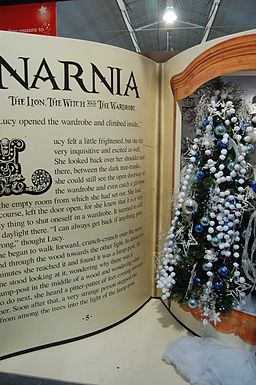 There are some books that I can read multiple times and still enjoy them as much as I did the first time I picked up the book. It’s like walking through a doorway into a secret world that is just waiting there for me to explore it. Going back in and re-reading the book is like visiting an old friend.

Some authors pull this off consistently. On the other hand, there are some authors — competent writers who know their craft — who write books that I read only once. While the books weren’t bad, I have no desire to go back and open them up again.

What makes a book re-readable?

I went back to some old, familiar books to try to determine what exactly it is that makes some books re-readable and others not. I wanted to find out how the trick was worked. The authors that I remember most from childhood* are the ones who wrote books that I can go back and re-read today, decades later. But I couldn’t analyze the magic by looking at individual books. It was like trying to analyze my kidneys. I’ve read them too many times; I’m too close to them.

So instead I went through to see if I could discover what they had in common. Here are a few things that I noticed, with examples from the text.

Opening lines that caught my attention right away:

“Repeat after me,” said the parson. “I, Horatio, take thee, Maria Ellen –”
The thought came up in Hornblower’s mind that these were the last few seconds in which he could withdraw from doing something which he knew to be ill considered.
-C.S. Forster, Horatio and the Hotspur

There was a boy called Eustace Clarence Scrubb, and he almost deserved it.
-C.S. Lewis, The Voyage of the Dawn Treader

To be encumbered with a corpse is to be in a difficult position, especially when the corpse is without the benefit of a death certificate. True, any doctor, even one just hatched from medical school, would have been able to diagnose the case of death. The man had died of heart failure, or what the medical boys pompously call cardiac arrest.
The proximate cause of his pumper having stopped pumping was that someone had slid a sharp sliver of steel between his ribs just far enough to penetrate the great muscle of the heart and to cause a serious and irreversible leakage of blood so that it stopped beating. Cardiac arrest, as I said.
I wasn’t too anxious to find a doctor because the knife was mine and the hilt had been in my hand when the point pricked out his life.
– Desmond Bagley, Running Blind

Use of the senses combined with the character’s emotions. Not just what it felt like to eat a pear, but how the character reacted. Too often, writers provide a clinical, detached description of what the food tasted like, spicy, sweet, whatever. I don’t want that. I know what food tastes likes. I want to know what the character feels about the food. The character’s reactions are my entryway into their world and the sensory details help anchor me in that world.

I should think that this effect could be achieved by any sensual description combined with the character’s reaction. However, each of the books I looked at included specific descriptions of food. The writers didn’t describe every  meal, but each book has a least one scene where the POV character sits down to a meal and enjoys themselves.

There were neat brown cutlets on his plate that bore no outward resemblance to lobster, but when Horatio cautiously added sauce and tasted, the result was excellent. Minced lobster. And when Doughty took the cover off the cracked vegetable dish, there was a dream of delight revealed. New potatoes, golden and lovely. He helped himself hurriedly and very nearly burned his mouth on them. Nothing could be quite as nice as the first new potatoes of the year.
-C.S. Forster, Horatio and the Hotspur

… on the table itself there was set out such a banquet as had never been seen, not even when Peter the High King kept his court at Cair Paravel. There were turkeys and geese and peacocks, there were boar’s heads and sides of venison, there were pies shaped like ships under full sail or like dragons and elephants, there were ice puddings and bright lobsters and gleaming salmon, there were nuts and grapes and pineapples and peaches, pomegranates and melons and tomatoes. There were flagons of gold and silver and curiously wrought glass; and the smell of the fruit and the wine blew towards them like a promise of all happiness.
“I say!” said Lucy.
-C.S. Lewis, The Voyage of the Dawn Treader

We both needed cheering up and there’s nothing like a first-class meal under the belt to lift the spirits. I don’t know if Mr. Fortnum and Mr. Mason are aware of the joy they bring to sojourners in far-flung lands, but after the oyster soup, the whole roast quails, and the pears pickled in cognac, I felt almost impelled to write them a letter of appreciation.
-Desmond Bagley, Running Blind

Scenery. The stories took me to a place that I wanted to explore. The location doesn’t have to be somewhere exotic. A place the character finds interesting, a place the writer wants to explore by way of writing a story.

It was an upholstered chair in which Hornblower sat; under his feet was a thick carpet; there were a couple of pictures in gilt frames on the bulkheads; silver lamps hung by silver chains from the deck-beams…But what held his attention most was two long boxes against the great stern windows. They were filled with earth and were planted with flowers — hyacinths and daffodils, blooming and lovely. The scent of the hyacinths reached Hornblower’s nostrils where he sat. There was something fantastically charming about them here at sea.
“I’ve been successful with my bulbs this year,” said Collingwood, putting his letters in his pocket and following Hornblower’s glance. He walked over and tilted up a daffodil bloom with sensitive fingers, looking down into its open face. “They are beautiful, aren’t they? Soon the daffodils will be flowering in England — some time, perhaps, I’ll see them again. Meanwhile these help to keep me contented. It is three years since I last set foot on land.
C.S. Forster, Hornblower and the Atropos

Lucy was of course barefoot, having kicked off her shoes while swimming, but that is no hardship if one is going to walk on downy turf. It was delightful to be ashore again and to smell the earth and the grass, even if at first the ground seemed to be pitching up and down like a ship, as it usually does for a while if one has been at sea. It was much warmer here than it had been on board and Lucy found the sand pleasant to her feet as they crossed it. There was a lark singing.
C.S. Lewis, The Voyage of the Dawn Treader

God has not yet finished making Iceland.
In the last 500 years, one third of all the lava extruded from the guts of the earth to the face of the planet has surfaced in Iceland and, of 200 known volcanoes, thirty are still very much active. Iceland suffers from a bad case of geological acne.
-Desmond Bagley, Running Blind

These are all examples from books that I read when I was a child and that I still remember decades later because the writer created a world came alive in my mind when I read it.

I didn’t start reading Rex Stout until I was a teenager, but he does this in his books as well. He starts the story out with an interesting situation, he includes sensory details with the POV character’s reactions, and he creates a world that I want to explore. That is why I go back and re-read his books. It doesn’t matter that the location is not somewhere exotic. In a lot of Rex Stout’s Nero Wolfe books most of the action takes place inside two rooms inside of a brownstone in New York City. He still creates a world inside that house that I like to explore.

This was just a quick analysis of a few books. It involved a lot of re-reading on my part (O, the sacrifice) but I am sure that there are other qualities that make a book re-readable. What makes you go back and re-read a book? Or is that something you never do? Why?

*Quick explanation: my definition of “childhood book” is a book that I read when I was a child. It is not necessarily a book that would be found in the Children’s section of your local library. I grew up in a house that had nine other people living in it. All of them were a) older than I was and b) reading books all the time. There were books lying around just waiting for someone to read them. A bookworm’s paradise. So I read a lot of books that probably wouldn’t ordinarily have been shared with a young child. Didn’t understand some parts of them until I was much older, but I read them all the same. By the time I was ten, I’d read all of the early works of Alistair Maclean, some of Raymond Chandler, and much of the Brontes as well as more traditional children’s fare such as the Narnia books.

One thought on “What makes a book re-readable?”